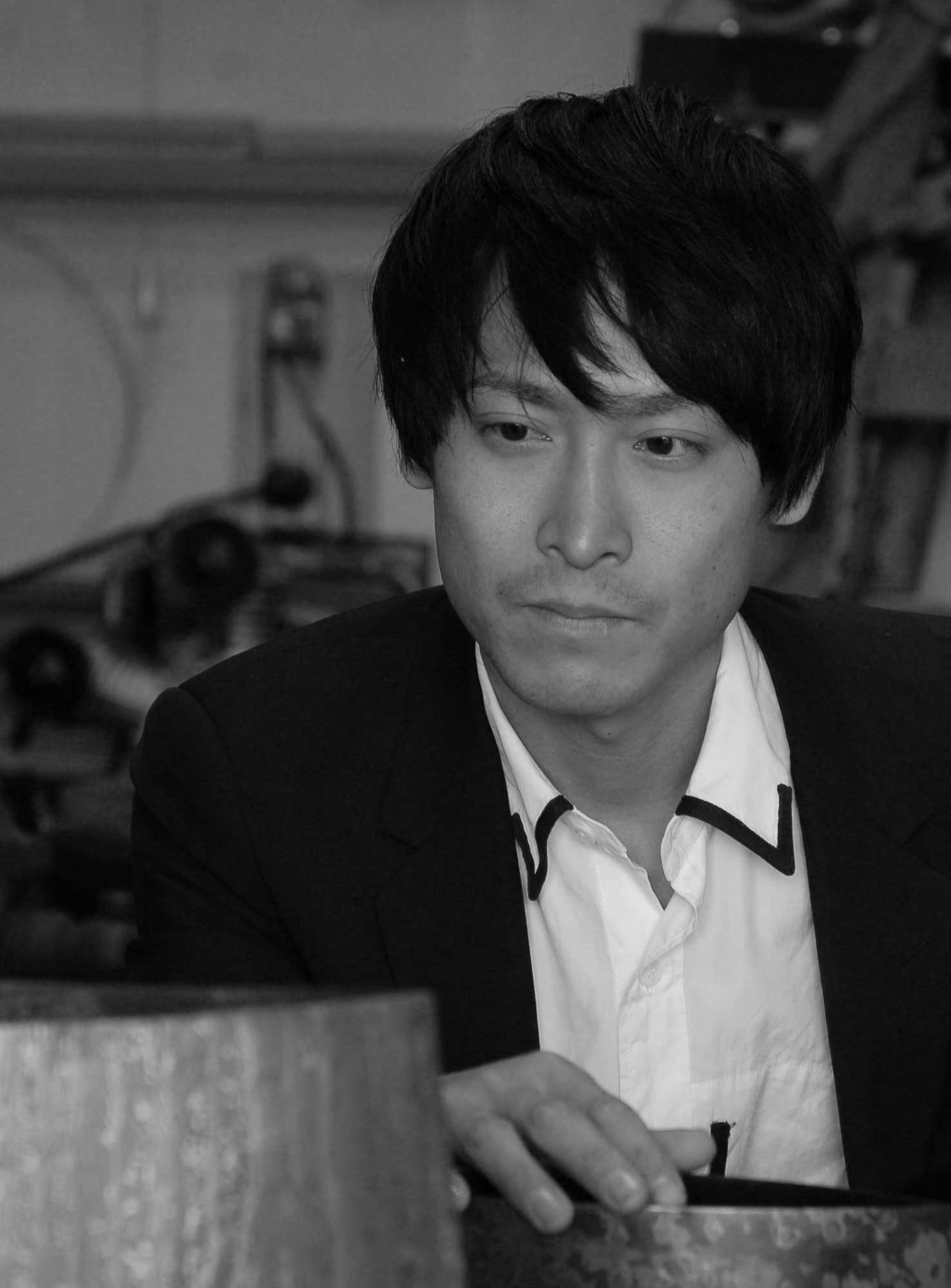 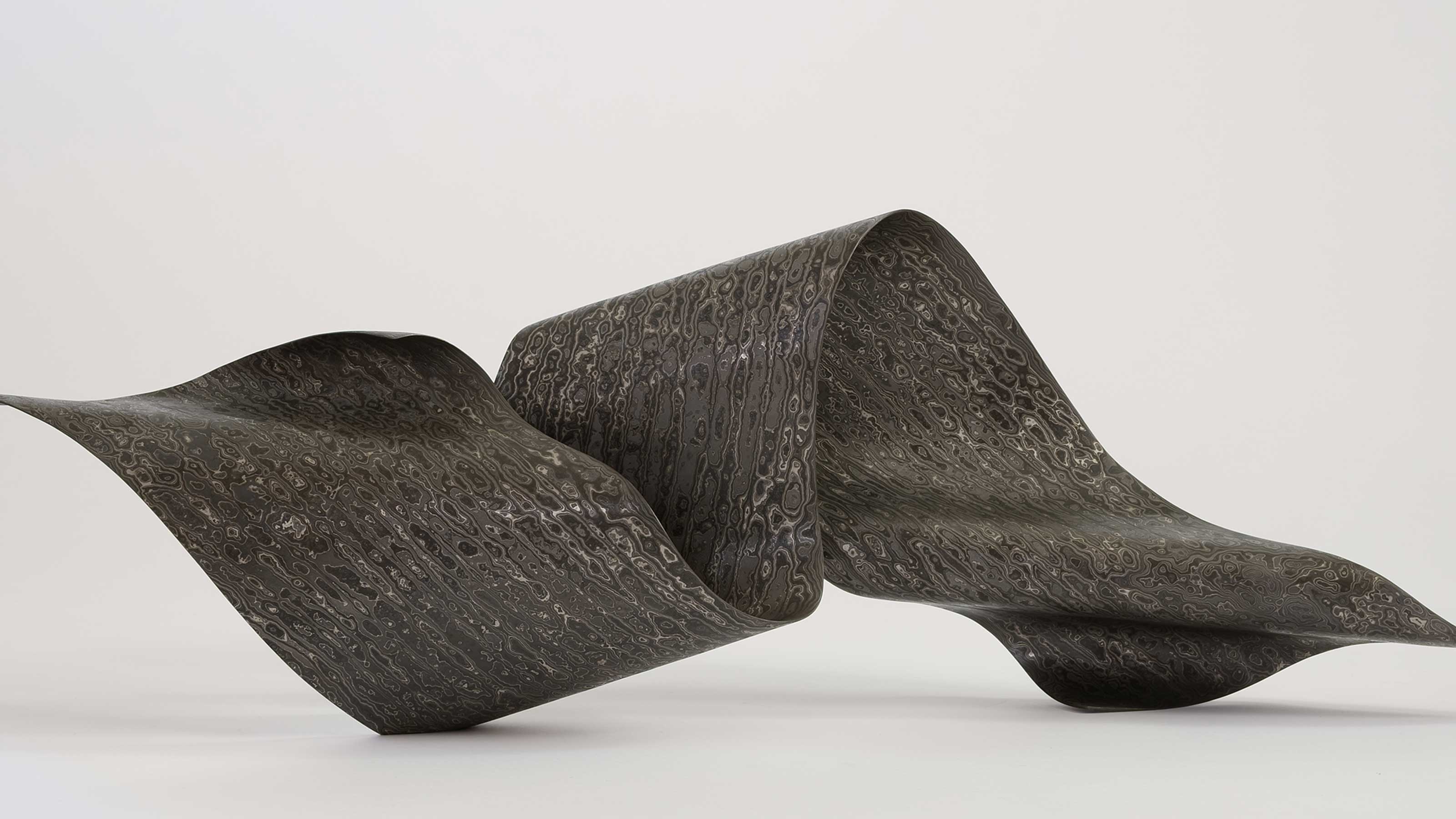 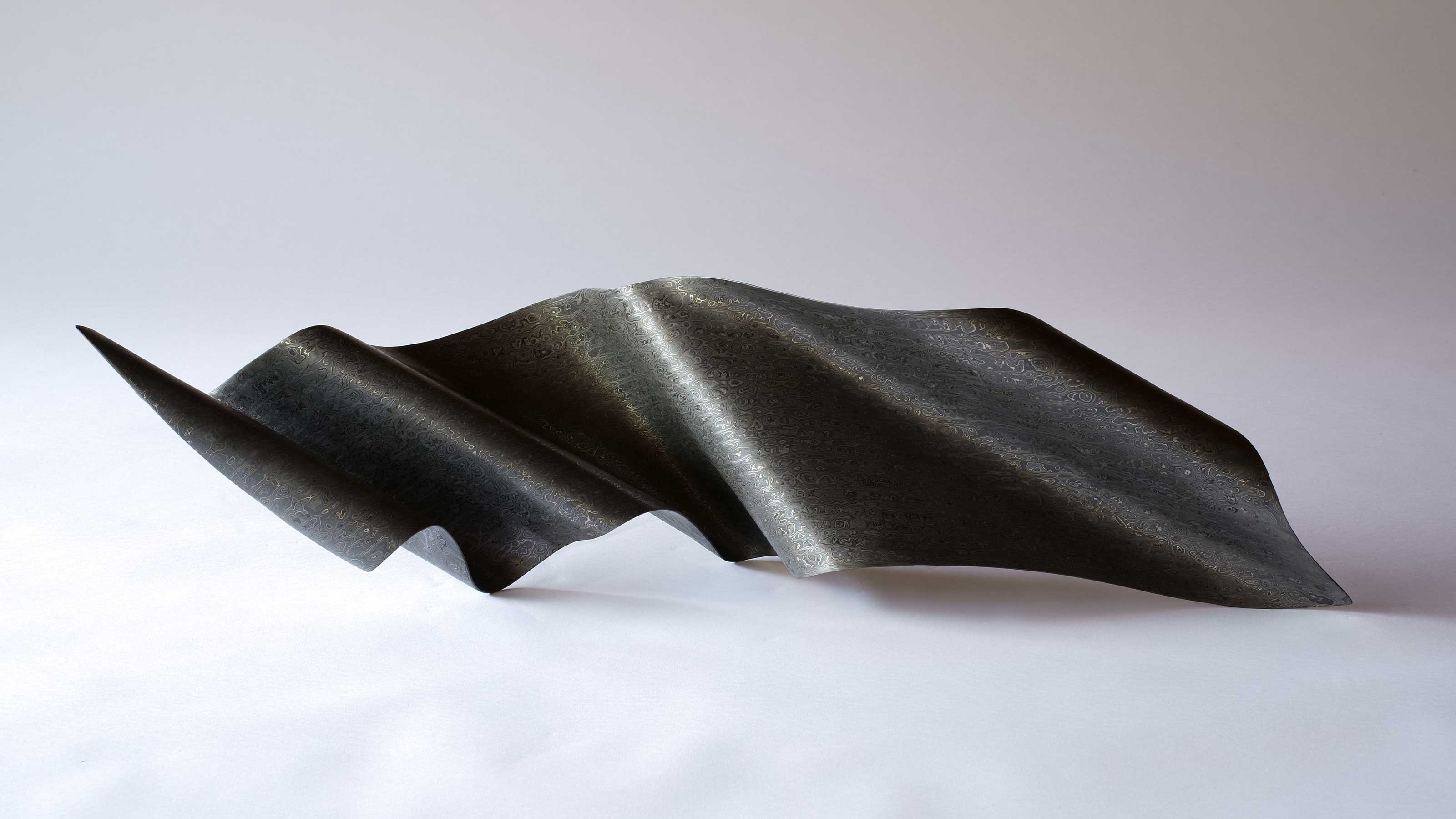 Kosuke Kato (b. 1988 –) is one of the leaders of an up-and-coming generation of metal artists in Japan who, while embracing the storied traditions of metal within Japanese history, strive for vistas never before seen in their respective materials. From samurai swords to armour, from tea ceremony ware to ceremonial vessels, metal has long been engrained in the national consciousness as only second to ceramics, a more tactile and utilitarian material, and the material of Damascus has no true roots in this island nation’s history. Yet Kato wields the metal that is Damascus steel with a minimal elegance, transforming the austere and medieval material into a compelling medium for abstraction within contemporary art. In Kato’s metal facades are the seven seas of serenity, an eternal loop that plays on and on, his silhouettes accentuating the raw beauty of Damascus in all its true glory. 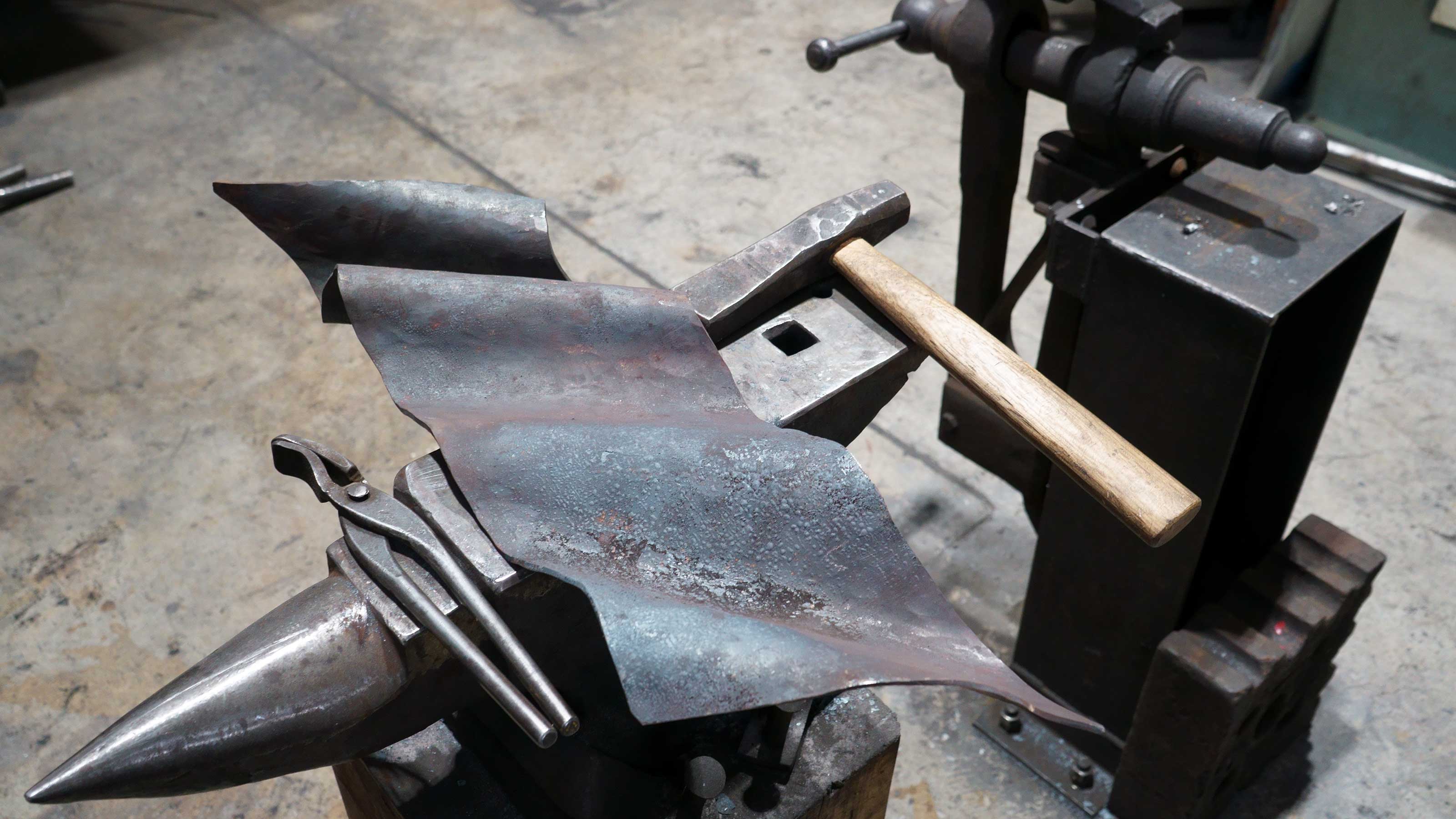 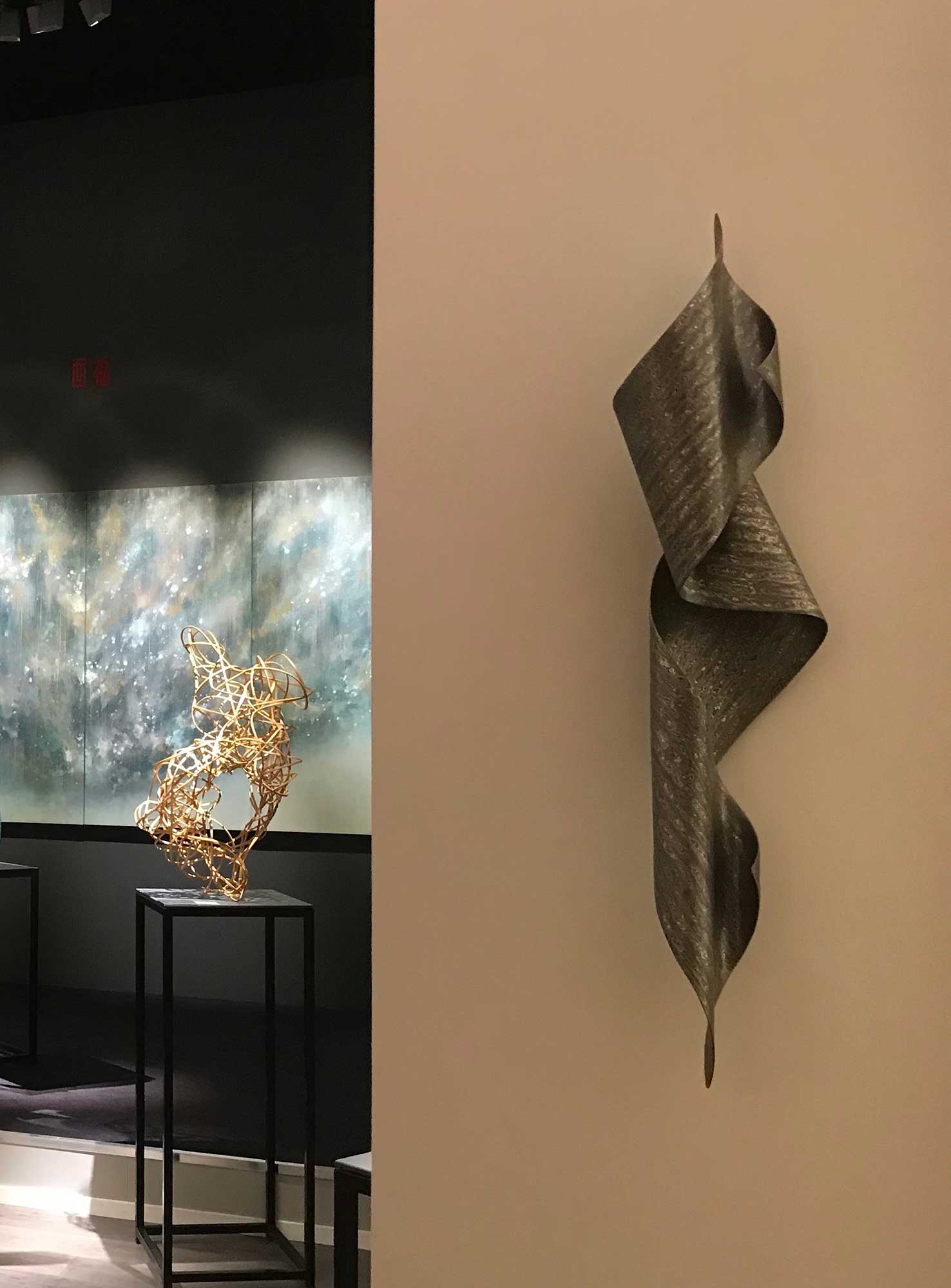 With his lead work for his debut exhibition at Yufuku Gallery in 2016 being acquired by the Philadelphia Museum of Art, and with a solo exhibition already slated for the Samurai Museum in Berlin, Germany, Kato represents the next generation of Japanese metal artists who are pushing the boundaries of their materials to new heights. 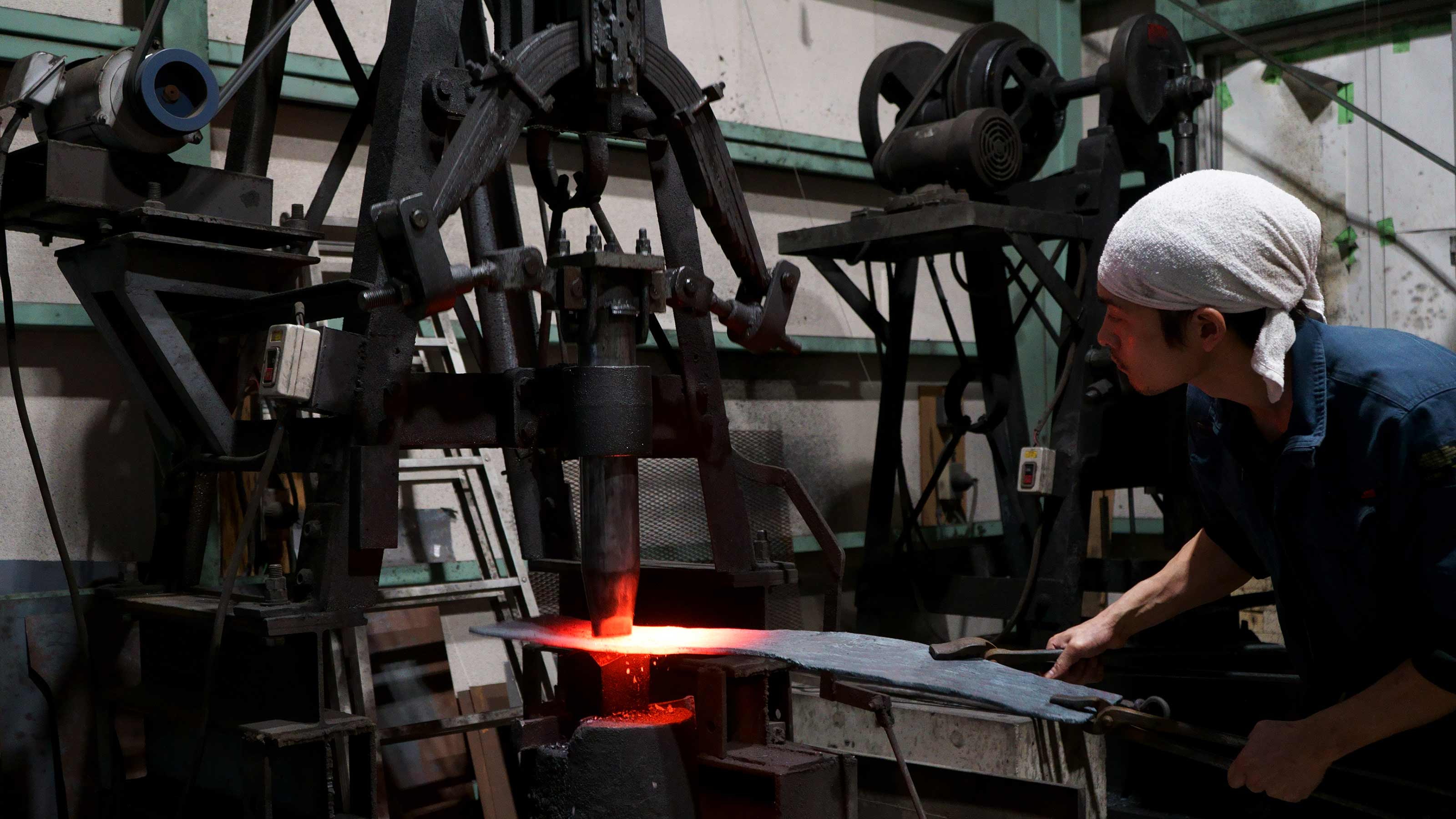 Damascus steel is known as a hard gray metal decorated with speckled, silvery ripples that resemble the flow of water, babbling streams and primordial pools of microcosms and microorganisms. Kato’s creative process within Damascus is a highly intricate process akin to the forging of Katana samurai swords. First taking 7 different sheets of iron ore and nickel, the artist piles them together and heats the materials into a single unit at a temperature of 1000 degrees Celsius. Once this temperature is reached, the process of hammering the metal, folding, then cutting the metal in two continues repeatedly, while throwing sand in to create and solidify a base billet. After compressing the billet, a pattern is embedded within the metal, and then polished out to achieve a metallic sheen. An acidic liquid is then applied to the surface, and the multi-layered Damascus motifs begin to rise from within the metal and appear on Kato’s facades. Lastly, the treated metal is hammer-raised into Kato’s distinctively serene and minimal silhouettes. TEFAF Maastricht will mark the debut of Kato’s new sculptural series Crescendo, which brings forth a riveting movement of vertical ebb and flow through the use of an attached metal pedestal. Clearly inspired by his Kanata predecessors such as Sueharu Fukami and Satoru Ozaki, Kato is creating a new realm of abstraction within Damascus that has not been pursued before.